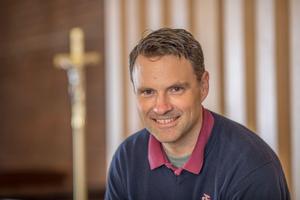 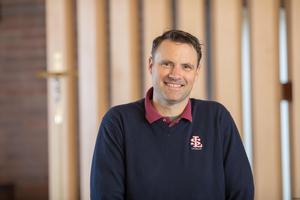 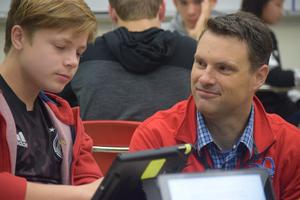 'Gary, like La Salle himself, is fearless in living the mission,' says colleague

Though the fall time change gave everyone an extra hour to sleep, then freshmen in Gary Hortsch’s first-period Intro to Catholic Christianity class still look a little groggy.

Undaunted, Hortsch stands at the front of the room grinning and asking every student to share something good about the weekend.

By the time he’s called on everyone and heard about everything from Timbers games to trips to the mall, he’s broken the ice. The students are alert; a few are smiling.

The soft-spoken Hortsch is known to seek – and find -- the good in anything and anyone, especially his students.

“Young people are incredibly gifted,” he said. “My job is simply to help them discover their own inner goodness.”

'Fearless in living the mission'

Hortsch’s demeanor and talent were just a few of the reasons fellow staffers at La Salle Prep voted him as the school’s 2018 Lasallian Educator of the Year. He will be presented with the award during the annual Heroic Vow ceremony on Wednesday, November 14.

“Gary embodies every aspect of our banners and the wider charism of Lasallian education,” said a colleague, one of several who nominated Hortsch for the award. “Gary leads with example as well as kind and supportive words, whether as teacher, coach, department chair, or campus minister…Gary, like La Salle himself, is fearless in living the mission.”

Hortsch grew up in Aumsville and graduated from Regis High School, a Catholic high school in Stayton. He felt called to become a religious studies teacher after attending a student retreat much like Journey, the retreat he now leads for La Salle’s juniors.

“That weekend changed my outlook on life, and gave me a renewed sense of purpose,” he said.

Hortsch said his high school track coach, Mike Bauer, also inspired him. “He cared about his athletes in people and always brought out the very best in every one of his athletes,” said Hortsch. “He coached with a continuous spirit of positivity.”

Hortsch put his positivity to work after earning his bachelor’s’ degree in secondary education at the University of Portland. He was working at the university as a hall director when he got a call (this one by phone) about a teaching position at La Salle. Soon, he found himself working at the school on Fuller Road.

'A perfect example of Lasallian principles'

Today Hortsch teaches several classes and serves as the school’s director of faith. He guides students in Lasallian Ministry, a class of seniors devoted to helping others and discovering their callings, and orchestrates retreats that challenge each student to look at the person within.

“I believe every student is filled with tremendous grace and that life is a matter of opening ourselves to those gifts and sharing them with others,” he said.

Evans Brackenbrough ’18, who served as La Salle’s officer of faith his senior year, said that Hortsch’s advocacy for families in need and people with developmental disabilities helps instill in students “a deep love for the people around us, particularly the most vulnerable.”

“I would sum Gary up as a perfect example of Lasallian principles in action,” said Brackenbrough, now in his first year at Seattle University. “He allows God to fill his life and thus spread his love to those around him.”

Rylee Kwiecinski ’19, said that Hortsch made it clear when she was a freshman that he cared about his students. She has such fond memories of his Monday morning check-ins that these days, when runs into friends she made in that class, she’ll let out a whoop and yell: “FRESHMEN RELIGION!”

Even though she hasn’t taken a class with Hortsch since she was a freshman, Rylee said she talks to him a few times a week about whatever’s on her mind.

“He is so calm, he just makes every situation so peaceful,” she said. “He isn’t just a teacher, he is a big brother. He cares so, so much about every single student at La Salle."