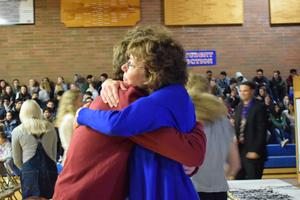 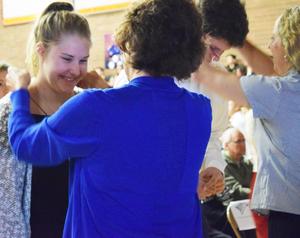 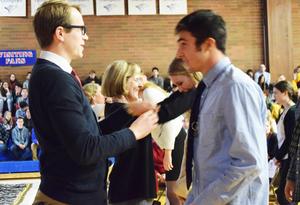 Seniors pledge to serve as 'big brothers and sisters' to younger Lasallians
During La Salle's annual Heroic Vow assembly on Wednesday, seniors promised to continue the mission and heritage of St. John Baptist de La Salle, founder of Lasallian schools.
Each of the seniors who took the vow received a medal that also signified their commitment to serve as "big brothers and sisters" to other students.
The seniors' pledge echoes the commitment shown by St. John Baptist de La Salle, who in 1691 vowed with two Christian Brothers to continue building a community of schools, even if they had to "beg alms and live on bread alone."
"The vow you have made will ask you to actively use the virtues which St. La Salle called all his teachers to live by," Vice Principal of Student Life Brian Devine said to the seniors. "It was not an easy task in 17th-century France. It remains a difficult task for all of us in the 21st century, but you are not alone. Unlike the brothers of that time who were few in number, there are over 1 million Lasallians worldwide who share this commitment to St. La Salle's Heroic Vow."
The faculty and staff then stood and pledged to stand behind the Class of 2019.
"These adults are the role models and support system you may need as you prepare to leave this community," said Devine. "Know you have the full support of this community. Look to them for guidance and be comforted in the fact that you are in our prayers."
Published November 14, 2018 Print