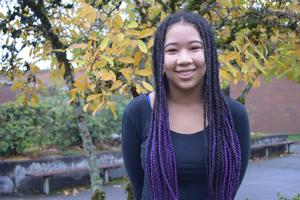 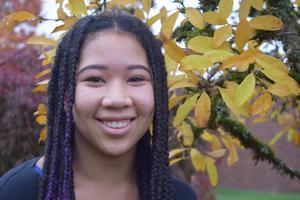 Nominators note her intellect, heart, and 'willingness to do the work'

Amira Tripp Folsom ‘20 received a 2018 Spirit of Portland Award from the City of Portland on Tuesday for her work educating youth and supporting human trafficking victims.

The awards recognize activists, community advocates, and individuals who advance the Portland community. Recipients were nominated by their peers, Portland City Commissioners, and the Mayor, and selected by previous honorees, community members, and City Council.

Folsom was honored for her work in and out of school. Her work at La Salle includes founding a student chapter of Youth Ending Slavery, which aims to combat modern-day slavery by empowering youth.

Since establishing the chapter, the group has raised money for former sex trafficking victims and raised awareness by posting information about the issue at school.

"What she has done is influenced her classmates and teachers to get engaged in this issue and has impacted Portlanders who have been exploited," said Adrienne Livingston, director of Anti-Sex Trafficking Initiatives for the nonprofit Worldventure, in nominating Folsom for the award. "I believe Portlanders would want to know what a young high school student is doing to bring hope to the hopeless and would want to learn how they can get involved too."

Folsom also helped stage the student-led walkout at La Salle after the school shooting in Parkland, Fla., on Valentine's Day.

In addition to giving a speech, and recruiting students and teachers to reach biographies about those who died in the Parkland shooting, Folsom worked with the school’s administration to make sure students weren't punished for leaving class for the event.

Folsom also helped organize the statewide walkout with other students from Oregon in collaboration with the Bus Project, which took place in Salem, Oregon. While at the statewide walkout, she spoke about the effects of police brutality and gun violence on the black community.

"This, in my opinion, embodies one person using her conviction, heart, and passion, to influence many communities," said Livingston.

Folsom's work includes serving on the Teen Council, which develops and coordinates a Teen Summit for over 400 girls in Oregon and being a member of Jack and Jill, Portland Willamette Valley Chapter which is a community service organization dedicated to leadership and community service.

"Amira will roll up her sleeves to support, create, and assist," said Traci Rossi, the executive director for the Center for Women's Leadership, who also nominated Folsom for the award.

"Her something special is her keen intellect and passion coupled with a willingness to do the work and learn from practical experiences while being immersed in social justice causes," said Rossi. "I was deeply impressed."