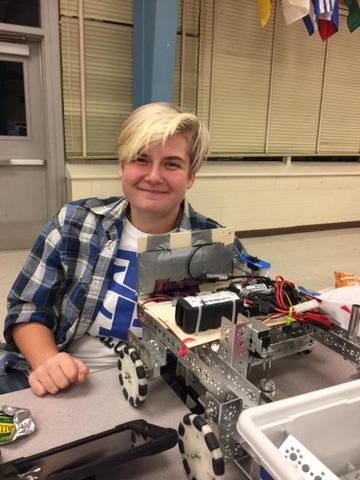 Emily Murdock ‘21 has been nominated as a 2018-2019 semi-finalist for the FIRST Tech Challenge’s Dean's List.

The list honors students for their contributions, leadership, expertise, and commitment to the FIRST Tech Challenge, a program in which students design, build, and program a robot to move independently, pick up items, and do other tasks.

“Emily has been a leader to our Robotics team and a role model for other students,” said teacher Tiffany Arnold, who, with teachers Chris Cozzoli and David Heineck, coaches La Salle’s robotics team. “She has been committed to learning new things without hesitation.”

Emily learned how to build a robot by working before school, after school, and on weekends. She taught herself how to code, then mentored others.

“I have never seen a more dedicated student in my 15 years as an educator,” said Arnold. “My favorite thing about Emily is her willingness to take on things she has no idea about...then helps her peers.”

Emily is a big part of the Falcon team, which at one point was in first place after four rounds during a recent competition. The team, identified in competition as #4511, is in the Oregon Rose City/Tualatin Valley League, and will compete again on Saturday, January 26, in Tigard.

Emily’s next step in the Dean's List Awards process will be a 5-7 minute interview this month. Good luck, Emily!