Lasallian will be part of Super Bowl LIII 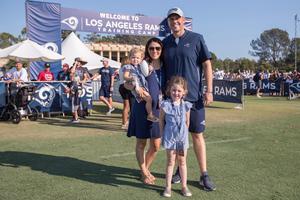 La Salle graduate Shane Waldron '97 will be part of Super Bowl LIII in Atlanta on Sunday as the Los Angeles Rams face the New England Patriots. Waldron is the passing-game coordinator for the Rams.

Waldron, 39, has worked in the National Football League for several years. He started his career as an intern with the New England Patriots, then worked for the University of Notre Dame, the Patriots, the United Football League's Hartford Colonials, the University of Massachusetts, and Washington's NFL team. He joined the Rams' coaching staff in 2017.

In addition to playing for La Salle, Waldron played tight end and long snapper at Tufts University, where he studied economics before graduating in 2002.

“You could tell Shane was driven and motivated to do something on the big stage,” said La Salle Athletic Director Chris George ’97, who played Falcon football and baseball with Waldron. “He often talked about collegiate and professional sports in such a manner that you could tell he was so intrigued and motivated. It’s no surprise he had the conviction and perseverance to be in the NFL coaching profession.”

Ray Baker, who was La Salle's head football coach during Waldron's high school years, said he was proud of Waldron.

"To receive an opportunity to coach in the NFL is such an incredible accomplishment, and to remain in the profession knowing how challenging it is, well, that is such a testament to Shane’s character, hard work, and perseverance,” said Baker, who's stayed in contact with Waldron since their days as Falcons. "It is clear he has remained grounded and continues to have a common touch with the common man, which has served him well.”

"He's a phenomenal coach," McVay said during a conference call with reporters. "He's a great communicator. He’s got a rare ability to authentically and genuinely connect with not only coaches but the players and be able to correct in a manner that doesn’t make guys' guards come up. It's all about problem-solving and doing it together."

Waldron isn’t the only Lasallian to make to the NFL. James Whalen' 96 played for the Dallas Cowboys in the early 2000s.

Waldron grew up in Carver and attended Carver Grade School, Clackamas Elementary, and Sunrise Junior High before enrolling at La Salle. His parents, Karen and Jay Waldron, are thrilled with their son’s success.