Drama students put on 'Noises Off!' this weekend 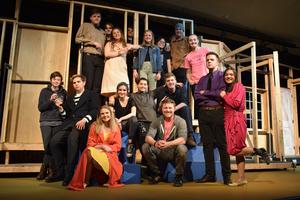 The stage show about what goes on backstage has been called 'the funniest farce ever written'
La Salle's Advanced Acting and Production students present "Noises Off," a farce by Michael Frayn about the backstage antics of a group of actors putting on a flop.
The show will be performed in the La Salle Theater at 7 pm on Friday and Saturday, Feb. 15 and 16.
The production is a student-produced show that culminates the first semester of the Advanced Acting and Production class taught by drama director Michael Shelton.
Tickets are $10 at the door. Presented with special arrangement by Samuel French Inc.
Published February 13, 2019 Print