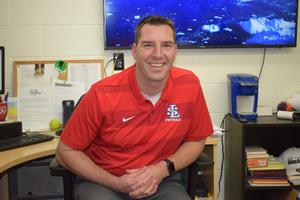 Aaron Hazel ’99 is among 142 finalists chosen from nearly 1,000 nominations
Health and PE teacher Aaron Hazel ’99, who is also La Salle's head football coach and assistant athletic director, has been selected as a finalist for the Positive Coaching Alliance 2019 Double-Goal Coach® Award presented by TeamSnap.
Hazel, who was nominated for the award by a La Salle parent, is among 142 finalists selected from nearly 1,000 nominees from all over the United States.
Fifty of the finalists will be named winners in the next few weeks. Each winner will each receive $200, a certificate, and an invitation to accept the award during PCA's National Youth Sports Awards & Benefit on Saturday, April 27, at Santa Clara University.

Once a Falcon, always a Falcon

Hazel's football background includes playing for the Falcons under head coach Ray Baker and playing for  Eastern Oregon University under head coach Jim Fenwick. Hazel also taught and coached football, basketball, baseball, and girls golf at Skyview High in Vancouver before returning to Milwaukie to serve as La Salle's head football coach in 2014.
"Above everything else, I try to teach our student-athletes that they are part of something bigger than themselves, and that their actions have an impact on others," he said. "It is my hope that they develop the ability to have disciplined responses to the events they encounter on a daily basis. Understanding that their response is an event to someone else is a concept that I believe will set them apart from everyone else, giving them the skills and characteristics to be leaders in their community."

Shawn Kelly '05, an assistant football coach at La Salle, said he's looked up to Hazel since Hazel coached him on the Falcons.
"His goal is always to help build our players to become better husbands, better fathers, and better men through the greatest sport in the universe," said Kelly. "I firmly believe year in and year out he accomplishes that."
The PCA will select one winner to receive a grand prize funded by the Taube Family Foundation - $2,500 to the coach and $7,500 to the youth sports organization or school that the coach chooses.
Published February 20, 2019 Print