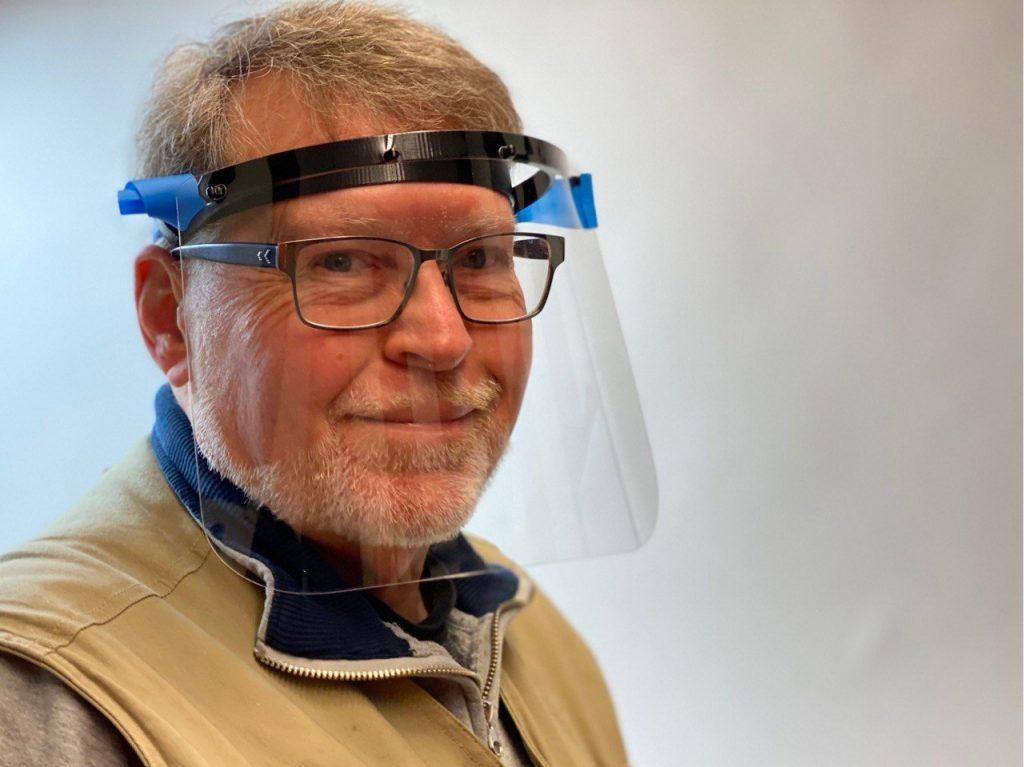 When Lincoln City cabinet maker, kite maker, and tech enthusiast Lindsey Johnson '70 discovered that his passion for 3D printing and technology could help outfit Lincoln County’s frontline healthcare workers to protect them from the coronavirus, he leaped at the chance. Johnson, who teaches 3-D printing at Oregon Coast Community College, teamed up with Taft High School physics and robotics teacher Noah Lambie to make and print face shields for healthcare workers in Lincoln County. They worked with Samaritan Health Systems to get the design approved and tested, ensuring that the shields met all requirements and could be properly sanitized.
Then, they turned the Community Room at the college (not currently in use due to remote learning) into a production facility. Read more about the project at the State of Oregon's My Oregon News website.
As of early June, Shield Me Please has supplied 350 shields to hospitals and clinics. Lincoln County has purchased 1,000 to be distributed through the Chambers of Commerce in Lincoln County for businesses that need them to comply with Phase 1 opening procedures 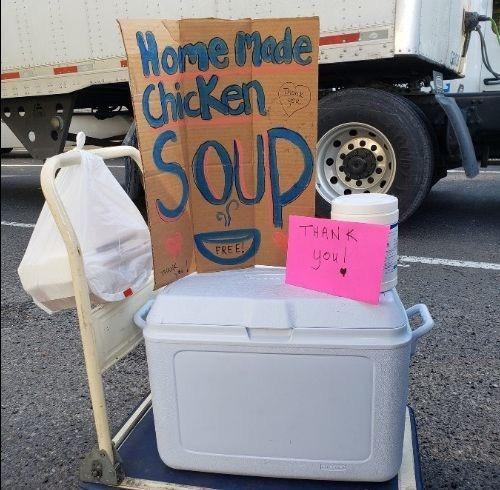 During the pandemic, Jane Schreiber McIntyre '85 and a team of volunteers have been making chicken soup for people who are homebound, sick, quarantined, or hungry in north Clark County, Wash.
People can pick up the soup at Amboy Territorial Park in Amboy, Wash. Those unable to leave their homes can have it delivered. 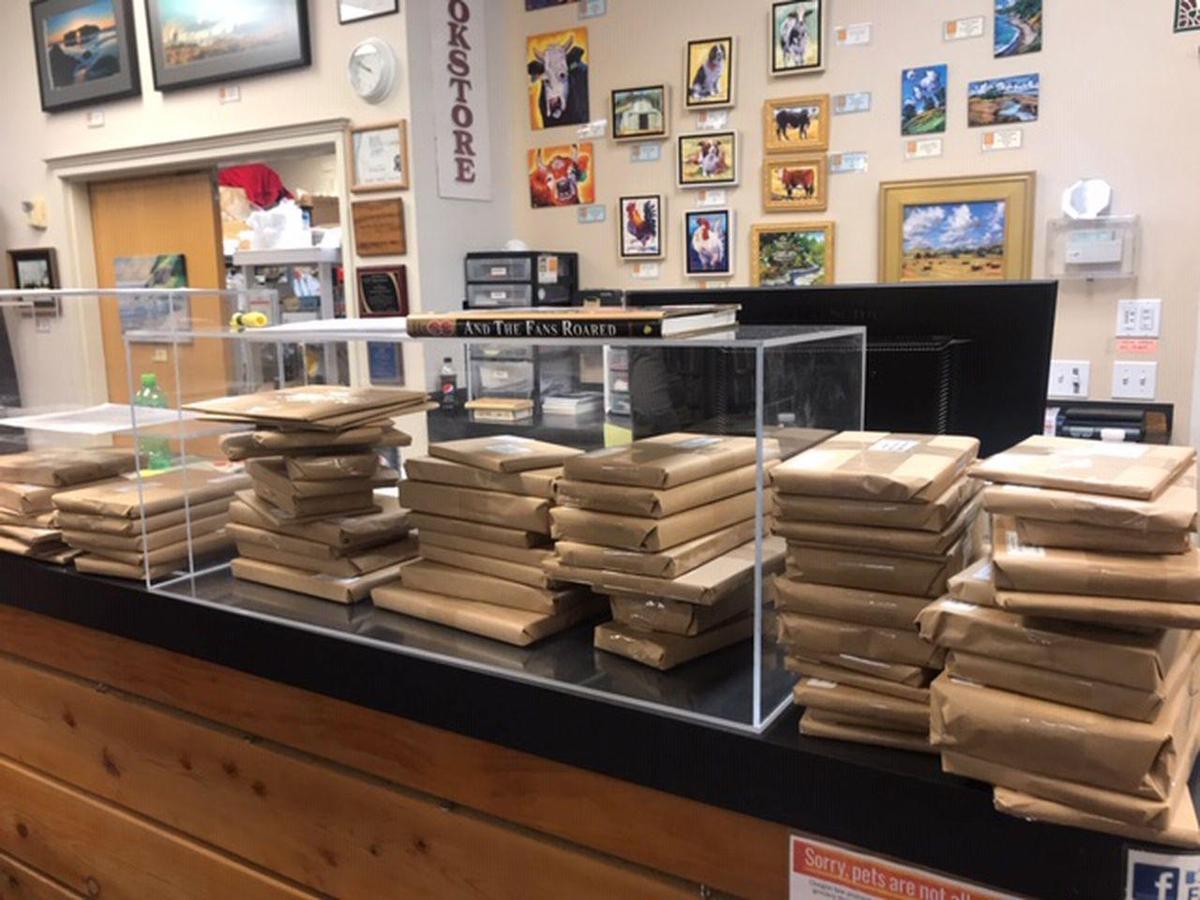 Teri Watkins Peterson ‘77, Traci Watkins Mennis ‘79, Toni Watkins Cline ‘82, and Tami Watkins Klupenger ‘83 co-own Gold Beach Books, a South Coast bookstore, which they inherited from their brother, the late Ted Watkins '76. The bookstore, with an inventory of more than 40,000 used books, was a passion project of Ted's and opened in 2003.

After witnessing many acts of generosity during the pandemic, Teri wondered what they could do to share some kindness in the world. So they decided to give away free books to anyone who asked and included the shipping costs, too. The effort was an amazing success and prompted many heartfelt responses from book recipients, who live in all 50 states. Their effort was chronicled on OregonLive.

"It has been a really fun project to work on; Teri and I spent many days in Gold Beach over the last couple of weeks selecting, wrapping, and shipping books while Toni and Tami handled the website, etc. from Portland," said Traci. "We have been overwhelmed with wonderful thank you notes that have arrived from people who received books and even those who didn’t. That, I know, would make Ted happy!"

Portland-based pianist and songwriter Kit Taylor is racking up a slew of songwriting awards. He was recently nominated for "Everytime You Breathe" and "Time to Say Goodbye" (featuring local musical icon Paul Creighton) in the Great American Song Contest. These are Taylor's ninth and 10th wins/nominations in major independent songwriting contests.
The latest nominations come on the heels of Kit's 2018 debut pop album, Love + Pain, which featured an array of talent, including platinum-selling local legend Marv Ross (Quarterflash), among others.
These days, Kit is in the studio working on his follow-up album, performing as a professional pianist, and applying for both NBC's "Songland" and for admission to the Berklee College of Music to further his connections in the business.
Class of 1970 shares wisdom with Class of 2020

Seniors Isabel Van Vleet ‘20 and Carson Redmond ’20 raised this question to La Salle’s student body as they concluded their speech honoring the Class of 1970 during the 2019 Heroic Vow Assembly. As the first class to graduate from La Salle, the Class of 1970 will be celebrating their 50th reunion in 2020.

Leading up to the presentation, seniors in the Lasallian Ministry class interviewed five members of the Class of 1970 to learn more about their days at La Salle, known as La Salle High School back then. Each conversation started with: “How has a La Salle education affected your life?”

From there, students asked about social life, religion, traditions, memories, and academics. They filmed their conversations and showed them at the assembly, which 13 members of the Class of 1970 attended.

After reflecting on their conversations, seniors observed the alumni had:

The graduates said it didn't seem 50 years had passed since high school; many of their friendships are still strong and vibrant.